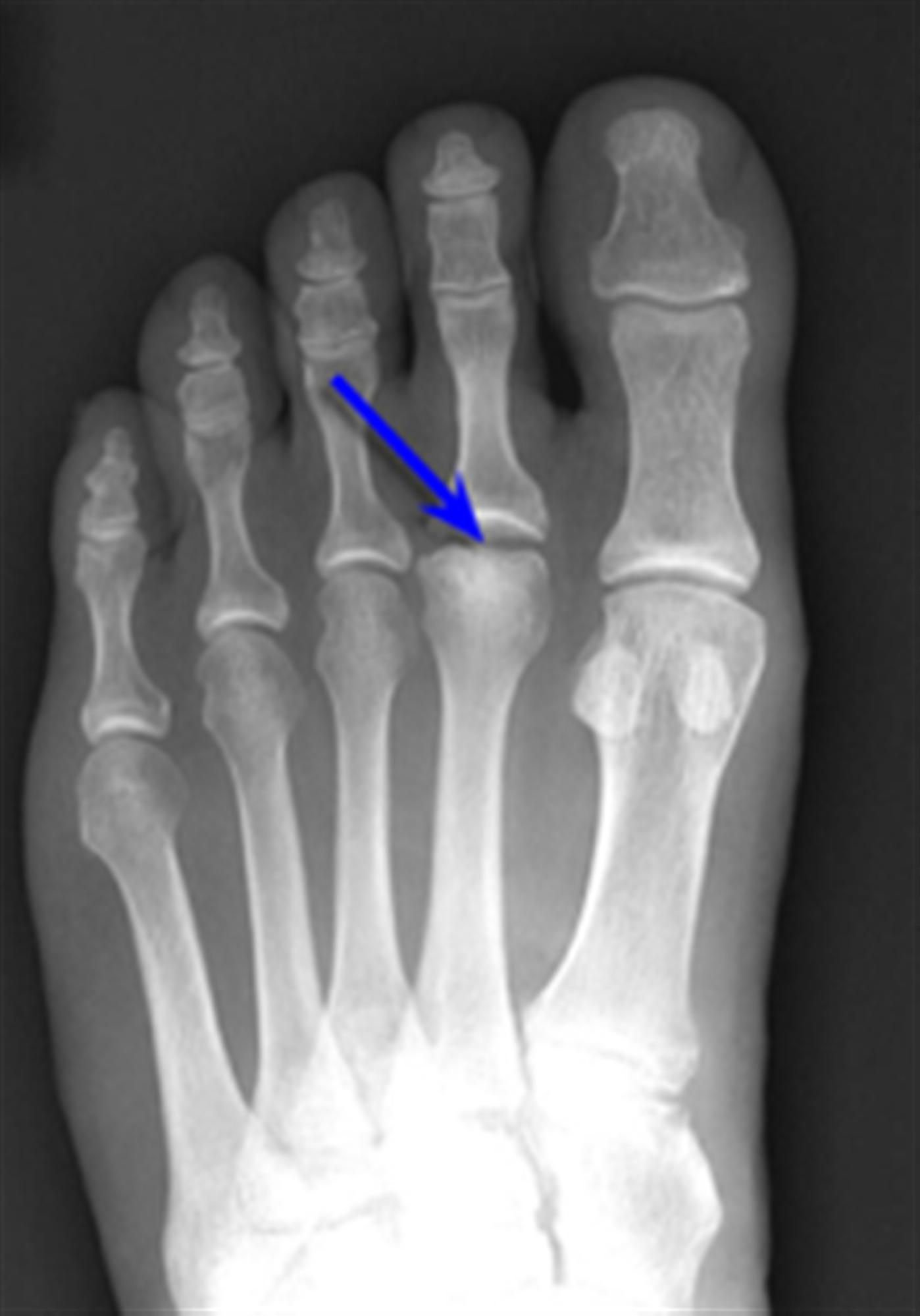 The following is an article written by J. Turner Vosseler, MD and Reviewed by Peter Deol, MD

Although very rare to see this condition in our office, we like to keep patients aware of all clinical possibilities and symtpoms present in many different forms. Dr. Michael Horowitz is always available to help with consultation, examination and diagnosis of your signs and symptoms.

You can reach our office at 604-737-3668 for more information. Contact Form is below at the end of this article.

Freiberg’s disease is a poorly understood disorder most commonly of the second metatarsal head in which a portion or all of the metatarsal head loses its structural integrity, which can lead to collapse of the joint surface and pain in the second metatarsophalangeal (MTP) joint. The process by which this loss of integrity and possible collapse happens is not well understood. Due to the fact that the affected area is often well circumscribed, the principle problem has traditionally been thought to be a vascular one. Basically, the blood supply to part of the bone of the metatarsal head for whatever reason is diminished or cut off. Freiberg’s disease, also called Freiberg’s infraction, is part of a group of disorders called osteochondroses, most of which affect pediatric patients, although Freiberg’s is more common in adults.

Freiberg’s is an epiphyseal disorder that ultimately ends up affecting the MTP joint. The second metatarsal head is most commonly affected, as it is the affected area in 68% of cases. The third and fourth metatarsal head account for 27% and 3% of cases, respectively. The first metatarsal head is never involved and the fifth only rarely. Bilateral involvement does occur in about 10% of cases.

Two classification schemes have been proposed, one more general for osteochondroses, one more specific to Freiberg’s. Omer generally described the pathologic process of osteochondroses. The first stage involves intraarticular and periarticular soft tissue swelling. The second stage shows some epiphyseal loss of contour, and the final stage is gradual replacement of the necrotic bone.

Succinctly characterized, stage one is loss of epiphyseal blood flow, while stage two is collapse of subchondral bone. Stage three is further collapse with some bone absorption, while four is with some fracture of the plantar hinge, and stage five is MTP arthrosis.

Early in the course of the disease, there are typically no clear radiographic changes. The earliest indication can be subtle joint space widening, although that is often a retrospective finding. More commonly, the first radiographic indication will be some flattening of the metatarsal head with or without increased radiodensity of the metatarsal head. The oblique radiograph can be useful to visualize the dorsal metatarsal head; it may show some early findings that are otherwise not well visualized. Late in the course of the disease, the findings are that of an arthritic joint, with joint space narrowing, osteophytes, periarticular sclerosis, and loose bodies. Magnetic resonance imaging can show periarticular edema, as well as some collapse of the articular surface.

Early in the course of the disease, patients can be put into a cast or boot with or without non-weight-bearing in an effort to decrease symptoms. Moving forward from that initial treatment, patients can be tried with any combination of a stiff orthotic insert, metatarsal pad, and rocker bottom shoe. Given that a tight heel cord could potentially increase forefoot loading and thereby worsen symptoms, stretching of the Achilles and/or gastrocnemius could be a part of a nonoperative treatment plan.

Operative treatment depends to some degree on how advanced the disease process is. For early stage disease, much like for osteonecrosis of the hip, core decompression has been advocated. Joint debridement is probably the most commonly performed procedure for this pathology, with removal of any and all loose bodies and excision of osteophytes. Various metatarsal osteotomies have been described in an effort to rotate the more normal plantar cartilage onto the end-loading surface of the metatarsal head. For end-stage disease, metatarsal head excision with or without interposition arthroplasty is often the treatment of choice.

Freiberg’s disease is an uncommon disorder that can lead to pain and loss of function in the forefoot. It is important for physicians to have it on their differential as they inspect forefoot pain. Early treatment can help to alleviate symptoms, while surgical treatment is reserved for those patients who symptoms continue despite nonoperative treatment.​